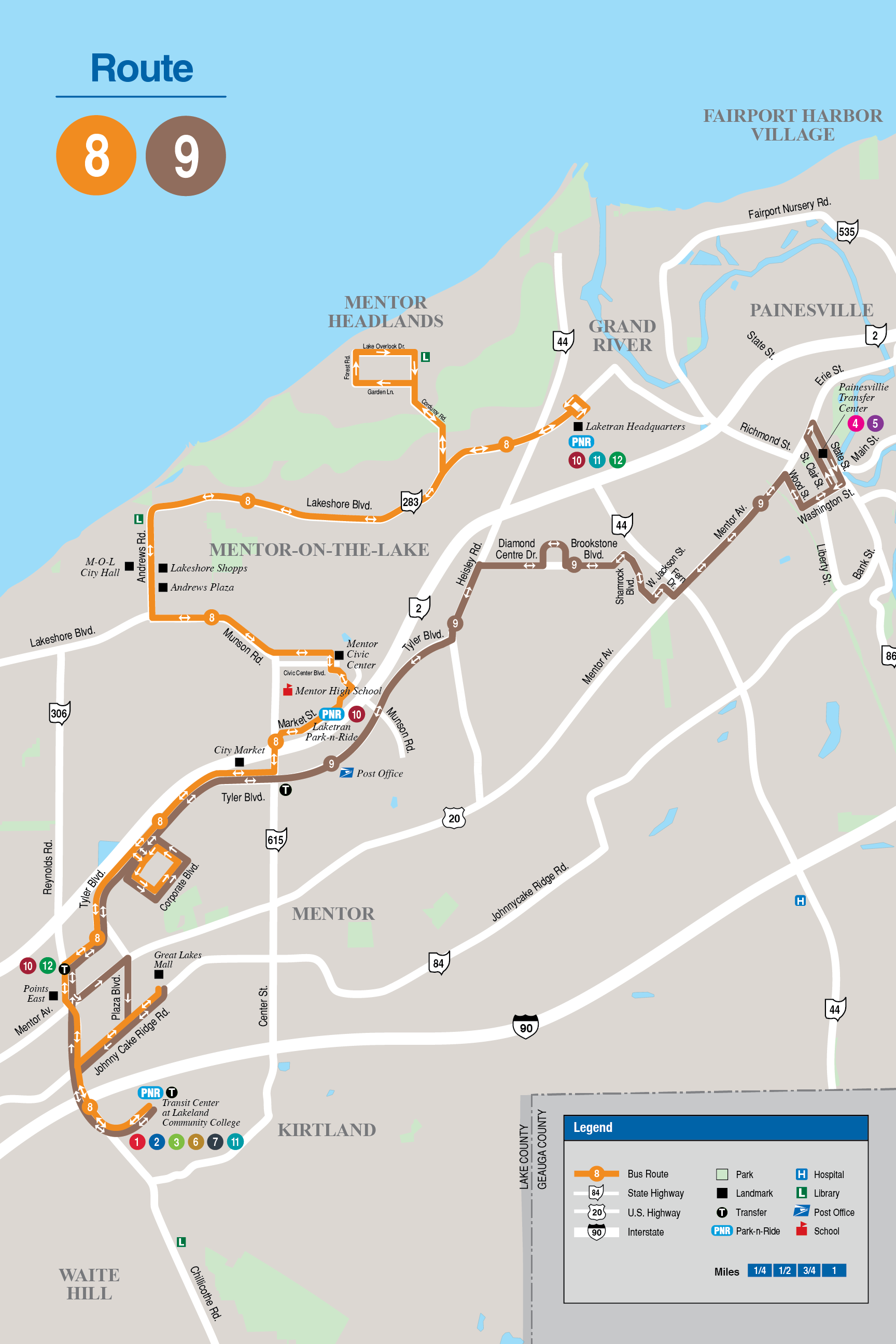 “Requests for fixed route transit service to Tyler Boulevard, Mentor-on-the Lake, and Mentor Headlands, have been going on for 20 years from both employers and residents,” explained Laketran CEO Ben Capelle.

The agency held multiple public meetings to gather input from residents and businesses on the needs of the community to design the routes.

“During our public hearing process and focus groups with Mentor businesses, we learned we also needed to better connect the east end of the county to jobs along Tyler Boulevard, so in addition to Route 8 in Mentor, we have launched Route 9 so residents in eastern Lake County can better access jobs,” continued Capelle. “These routes will fill a transit gap in the center of the county with improved connectivity throughout our entire system making it easier for customers to transfer in county or to Cleveland using one of our Park-n-Ride routes.”

Route 9 will provide peak service connecting downtown Painesville and Tyler Boulevard with service to Diamond Centre. Service will operate weekdays from 5:30 a.m. to 8:30 a.m. and 2:00 p.m. to 6:00 p.m.

Route 9 service will operate with a smaller Dial-a-Ride style bus equipped with amenities of a traditional fixed route bus including bike racks, stop cords, a destination sign and fare box.

The new routes, made possible by the passage of Laketran’s quarter of one percent sales tax levy last November, will provide access for nearly 58,000 residents and to 33,000 jobs.

“One of the primary roles of transit is to increase economic activity, and one of the most impactful ways transit does that is by providing a reliable way to get people to work,” said Laketran board president Brian Falkowski. “Lake County voters passed our sales tax levy based on a promise to improve access to job corridors with this route in mind. Even though the current pandemic has created uncertain times, we are committed to fulfilling that promise, especially when people may be looking for new job opportunities.”

Mentor City Ward-4 Councilperson, John Krueger, has petitioned for service expansion in Mentor for a number of years, “We’re excited to finally have service to our Headlands area and through our vital manufacturing corridor. Laketran plays a significant role in our local economy by providing direct access to high-paying, skilled positions in our City. This new route will enhance connectivity throughout Mentor and surrounding communities.”

Mentor-on-the-Lake residents that attended a public hearing for the service in March were eager for a more affordable transit option.

Mentor-on-the-Lake residents, who have had to rely on Dial-a-Ride or just live without, now have a transit option that runs more frequent and is less expensive,” shared Mentor-on-the-Lake Mayor Dave Eva. “We have a perfect mix of businesses and residents, plus a very pedestrian friendly community to have transit thrive here and we appreciate all the efforts Laketran has given to make this route a reality.”

Laketran will also make a slight route change to Route 3 along Lakeshore Boulevard in Willoughby to travel along Tamarac Boulevard and Lost Nation Road to better serve the residential area.

Laketran plans to launch the new services by late September.